Dad Believes In an Amazing Life For His Son With PWS

When his son was diagnosed with PWS, this dad started learning a new way to look at problem solving and a new definition of success. 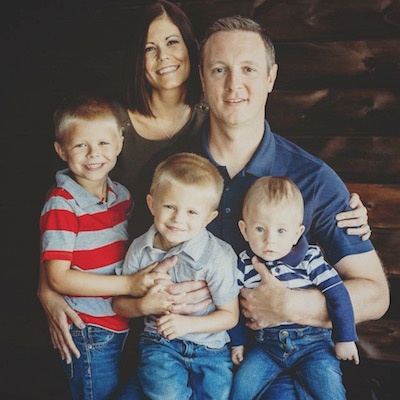 A special contribution by Brian Kalasek

My introduction to PWS probably started very similar to other PWS families. We were admitted to the NICU on day 3 of Paxton’s life. He hadn’t really “woken up” yet, but the nurses and doctors up to that point didn’t seem too concerned. They kept telling us he had WWBS, Wimpy White Boy Syndrome. Funny I thought, I’ve been fighting that for the past 36 years myself with limited success. By the end of the day 3 though everything had changed, we went from what we thought was a healthy little boy in the morning to total despair by dinner time.

I remember Paxton’s doctor coming in and talking to us about his symptoms and explaining that there’s usually a root cause. I remember her saying Prader-Willi syndrome. I’d obviously never heard of it before, but the way she said it didn’t instill any fear in me. It was just matter of fact: "Oh hey, by the way, we think he might have something called Prader-Willi syndrome,” and that was it. The doctor’s low-key delivery made me think there was probably a pill we could take in the morning and all would be good. I asked her to write it on the white board so I could look up later. Some time goes by and I had a chance to Google it, oh no, this isn’t good at all. ... I read the list of symptoms to myself and looked at the black and white pictures of kids on a webpage. ... I felt sick! My wife asked me to read it to her but I refused. Eventually relenting, I remember almost yelling at her each new symptom on the list: hypotonia, learning disabilities, skin picking, behavioral problems, hyperphagia, and on and on it went. That was a really bad day.

The initial shock of receiving a diagnosis of PWS was really difficult. Our lives up to that point were going just as we had planned. We already had two typical boys at home, great jobs, and a happy “normal” life. In hindsight, most of my initial reactions were centered around how this would change my life. We weren’t “special needs parents” we were just "normal" parents. Special needs children were for people who knew what they were doing and we didn’t. I couldn’t see a path forward at that point, so we just took it hour by hour and day by day.

What We Can and Cannot Control

Fast forward a year and Paxton has come so far. He’s almost crawling, “talks” a lot, is social, and generally, is a very happy little boy.

I wrote a letter to Pax the first week he was born; I promised him we would do literally anything to help him. I think we’ve done that this first year and I’m proud of that. Nothing teaches you more about what’s in and out of your control more than having a child with special needs. We can’t control his genetics or the natural progression of the disorder. What we can control is our proactive approach to his treatment, our interactions with him each and every day, and our positive outlook for his future.

I’m generally very positive when it comes to Paxton’s future, but that’s not to say I don’t worry. In fact there’s not a day that goes by that I don’t worry about something. Things like will treatments be available by the time Paxton needs it, will he live with us forever and what happens when we die, will Paxton’s brothers and sister be willing to help take care of him, will I be able to continue to travel for work as Paxton’s gets older, how will his siblings react to Paxton’s needs, will Sam and I ever be able to travel alone, where will Paxton work, will he be able to work, will he have meaningful relationships outside of our family, and most importantly – will he be happy?

Changing the Definition of Success

I think as dads we see a problem and we just want to fix it. My son broke his arm, take him to the doctor. The dishwasher broke, call a repair guy. My son has Prader-Willi ... crickets. How are you supposed to have goals and dreams for your child if you don’t even know a realistic endgame? At work it’s easy to measure success. I need to generate X amount of revenue. If I do that, it's good, if I don’t, it's bad. But measuring success in the outside world doesn’t necessarily translate to the PWS world. Early on I decided I had to change how I thought about success for Paxton. That’s not to say I don’t want all the same things for him as I want for my other kids, but it does mean that his path will be very different. At times he’ll march at a slower pace, and that’s ok. After all, I have dreams and goals for all of my kids, I’m sure the same as my parents did for me, and how many kids actually end up following the path their parents laid out for them. I’d bet very few!

I wrote this blog post over the time span of a few weeks, but could never figure out how I wanted to end it. Tonight I’m sitting in his hospital room staring at him sleeping through the metal bars of a hospital crib, so I decided this was as good of time as any to wrap it up. We did everything we could this winter to avoid germs, but Pax still came down with RSV and Pneumonia. As hard as we tried, we didn’t have control over the situation, just as we don’t have control over the natural progression of PWS. I hate that! But for all the fear and unknown there are two things that give us comfort for the future. The first is hope; I truly believe that Paxton will have an amazing life. I look forward to the day he graduates college and I can remind him how scared we were when he was born and how far he’s come. The second thing is the research being funded by FPWR. We co-hosted our first One Small Step walk last Fall and it was an amazing experience, raising over $30,000. At least for that one day I felt like we had control. Raising money for research is something we can all do to impact our kids’ future.

I wouldn’t wish PWS on anybody, but I also wouldn’t wish away Paxton for anything in this world. Paxton is Special, not "special needs" special, but just Special. He’s changed how we look at life, how we measure success, and how we celebrate the little things. He’s brought so much happiness to our family and will continue to do so. I don’t know what the next year, 5 years, 10 years and beyond holds for Pax, but I do know that we’ll continue to do everything we can to help him have an amazing life.

Do you have a story of hope to share with others about your experiences with PWS? Send it to us!