The Importance of Growth Hormone Therapy for PWS

Early diagnosis and optimal clinical care can improve outcomes for people with PWS, and one proven intervention is growth hormone therapy. This treatment was approved by the US Food and Drug Administration for children with PWS in June 2000. Since then, several benefits have been reported, and growth hormone therapy for PWS has become an important step after an initial diagnosis.

What is growth hormone therapy?

Human growth hormone is produced naturally by the pituitary gland in the brain. It is released periodically throughout the day and particularly in the first few hours of sleep. The hormone spurs growth in children and adolescents through the action of insulin like growth factor-1 (IGF-1), and also helps regulate body composition, fluid balance, fat and carbohydrate metabolism, and heart function.

In PWS, growth hormone is effective not only in increasing height, but also in:

The use of the treatment is widespread in PWS. As reported in the Global PWS Registry, which has more than 2,000 registered participants diagnosed with PWS, 91% of respondents say their participant is using or has used growth hormone. Of those participants who have used growth hormone, 71% began before age 2, and 93% perceive they have received benefit from the drug. 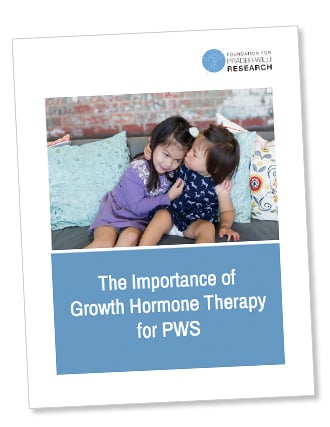 When is it started?

Proper nutritional management remains a mainstay during growth hormone therapy. Regular contact with a dietitian is important throughout the lifespan of the person with PWS.

How much is given?

There is not a set dose for all patients with PWS, and every patient is different. An endocrinologist will adjust dosing based on factors including the patient’s body weight or body surface area and IGF-1 levels, since IGF-1 production is directly linked to the amount of growth hormone present in the body. Endocrinologists can tell when human growth hormone dosing for PWS is right based on the overall health of the patient, hormone levels, and height. Typically, endocrinologists adjust growth hormone dosing so that IGF-1 levels fall in the upper part of normal range.

How is it given?

Currently growth hormone is given as a subcutaneous (under the skin) injection, usually every day or six days a week, before bedtime. The possibility of delivering growth hormone via inhalation – similar to the way asthma drugs can be delivered – has been explored, but so far this delivery method has not been as effective as injection. A few pharmaceutical companies are developing long-acting formulations of growth hormone, which may allow for less frequent injections. None of these have been approved yet.

Several reports support the benefits of growth hormone therapy for children with PWS.

A study by Carrel et al found improved mobility and body composition in young children who had started growth hormone therapy as infants or toddlers. A follow-up study compared a group of 6-year-olds who received therapy to another group of children, matched for age, who had not received therapy. Looking at a battery of tests, including height, body fat, “good” and “bad” cholesterol, motor strength, and agility, kids taking growth hormone from a young age came out on top for all measures.

The authors concluded that growth hormone therapy, started in infants, significantly changes the natural history of PWS in a beneficial and clinically meaningful way.

Another study by de Lind van Wijngaarden and colleagues followed 55 children in the Netherlands over four years of growth hormone therapy. The children experienced height increases similar to their peers, and had improvements in body composition, decreases in body fat, and stabilization of lean body mass.

Other benefits noted in the medical literature include improved:

There is some evidence that growth hormone therapy may improve cognitive outcomes in children with PWS.

There is mounting evidence that human growth hormone can also be beneficial for adults with PWS, with noted improvements in body composition, mental speed, mental flexibility, and motor performance. Growth hormone therapy in adults with PWS increases cardiac mass, while decreasing the size of the left heart ventricle. This results in improved heart metabolism and an overall decreased cardiovascular risk.

Other benefits of growth hormone therapy for adults with PWS include:

Research on growth hormone therapy supports its benefits when used for PWS treatment, while continuing its reassuring safety profile. This means that for all the benefits the treatment delivers, it does not increase risks of other health issues.

No Greater Risk Of Leukemia

One concern when growth hormone therapy first came into clinical use was whether its use in children might increase the risk of leukemia. However, a study by J. Bell followed almost 50,000 children who received growth hormone between 1985 and 2006. Some children had PWS, and some were undergoing growth hormone treatment for other reasons. They found that slightly less than the expected number of children in this group developed leukemia. For children who had cancer previously, there may be an elevated risk of cancer recurrence with growth hormone, which is consistent with previous reports and is not relevant for those with PWS.

No Greater Risk Of Scoliosis

Other concerns specific to PWS include scoliosis (curvature of the spine). Scoliosis is very common in PWS, and some physicians may be concerned about growth hormone use in individuals with PWS who develop scoliosis. But data suggests that human growth hormone does not worsen scoliosis outcomes. If anything, it is associated with slightly better outcomes, perhaps due to strengthened muscles. A study that compared children on growth hormone to those who did not receive growth hormone, and saw no difference in the rate or severity of scoliosis. Another study examined the incidence and severity of scoliosis in children with PWS who used GH for a longer period (8 years). There was a similar incidence of scoliosis, but less curve (better outcome) in the children who were given GH. Thus, the general consensus of PWS experts is that scoliosis is not a reason to stop or change growth hormone therapy, although individual cases should be discussed with health care professionals who are knowledgeable about PWS.

Despite the many benefits of growth hormone therapy for PWS, there are many factors to keep in mind as you discuss treatment with your endocrinologist.

Growth hormone treatment may cause tonsils to grow, which can worsen obstructive sleep apnea.

One study looked at changes in sleep in the six weeks following initiation of growth hormone therapy. Most patients had better sleep (less apnea), which is consistent with longer-term studies that show improvements in sleep quality. However, about one-third had worsening of sleep disturbances generally associated with enlarged tonsils and upper respiratory infections.

Based on this, changes in breathing should be reported and sleep studies are recommended both at baseline and within three to six months after initiating growth hormone therapy to address enlarged tonsils, as needed.

Following a multi-disciplinary evaluation, preferably by physicians with expertise in PWS, growth hormone treatment should be considered for patients with genetically-confirmed PWS in conjunction with dietary, environmental, and lifestyle interventions. The informed consent process should include a discussion of benefit and risk information.

There are factors that should exclude growth hormone therapy as a therapeutic option for some individuals with PWS. These include:

Clinical outcome priorities vary depending on the patient’s age and the presence of physical, mental, and social disability, and treatment should be continued as long as benefits outweigh the risks.

Experts agree that children and adults on growth hormone treatment should be closely monitored throughout the process, with specific attention paid to:

Side effects of growth hormone treatment can include:

Patients experiencing side effects that may be due to growth hormone therapy should discuss them with their endocrinologist; sometimes an adjustment of dose is needed.

While specific treatment plans will vary for all individuals with PWS, there are international consensus guidelines for the use of human growth hormone in PWS. These published guidelines can be used by medical professionals to help determine treatment. 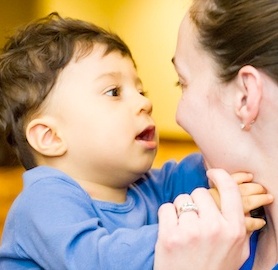 Growth hormone therapy, combined with dietary, environmental, and lifestyle interventions, has been shown to improve the symptoms of PWS and help people with PWS lead healthier, more active lifestyles. There are also significant benefits to beginning growth hormone therapy as early as possible. The process can start by making an appointment with your endocrinologist.

For more information about growth hormone therapy for PWS, download this free fact sheet. And to be part of the advancement of treatments such as growth hormone therapy in making a difference in the lives of people with PWS, look for clinical trials in your area. New trials are always being added, and eligibility criteria vary by study.