A group of researchers are studying neurons derived from ‘baby teeth’ of children with PWS to find molecular factors that increase ASD risk in PWS.

In Prader‑Willi syndrome (PWS), the two main genetic subtypes are PWS by deletion (a small part of dad’s chromosome 15 is missing), and PWS by maternal uniparental disomy (UPD; where two copies of chromosome 15 are present from the mother with no copies from the father). It has been shown that those with PWS by UPD are at higher risk for autism spectrum disorder (ASD) than the neurotypical population, as well as compared to those with PWS by deletion, but it’s unclear why that is the case. A group of PWS researchers, led by Dr. Larry Reiter at the University of Tennessee Health Science Center, have been using neurons derived from ‘baby teeth’ of children with PWS to try to identify the underlying molecular changes that increase the ASD risk in those with PWS by UPD. 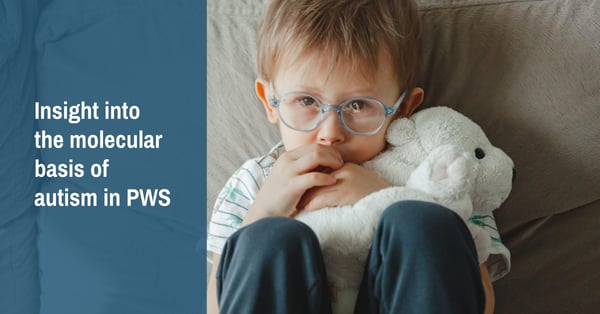 The full article, Molecular Changes in Prader‑Willi Syndrome Neurons Reveals Clues About Increased Autism Susceptibility, was recently published in the journal of Frontiers in Molecular Neuroscience. These stems cells from the teeth (dental pulp stem cells, DPSC) can be used to generate all different types of cells in a laboratory dish. In this study, the researchers used these DPSC to generate neuronal cells, mimicking those in the brain, and then examined genes expressed in those cells, comparing neurotypical DPSC to those from individuals with PWS by deletion and PWS by UPD, with or without a diagnosis of autism.

Overall, the researchers found differences in the genes expressed in DPSC between the two PWS subtypes and the neurotypical controls, including several genes outside the PWS region on chromosome 15.  This suggests that the changes in expression of these genes may be important for conferring the symptoms associated with PWS, and further studies are warranted to understand the role these genes play in the development of PWS characteristics.

The researchers next went on to examine gene expression differences between those with PWS by UPD, who were or were not diagnosed with ASD. Interestingly they found important differences in the expression of genes that function in the mitochondria, suggesting that mitochondrial dysfunction may be a potential reason for the increased autism risk among those with PWS by UPD.  You may recall from your high school biology that mitochondria are the organelles in the cells that are essential for cellular energy (the ‘powerhouse of the cell’).  To further study this hypothesis, the researchers looked at the neurons under the microscope and examined the number and location of the mitochondria. They found that there was a significant change in how the mitochondria were located in the neurons of individuals with PWS and autism, with a ‘clumping’ of the mitochondria rather than a dispersed pattern throughout the cell. The authors suggest that inadequate mitochondria function in developing neurons may contribute to the development of autism in people with PWS.

These results are very important, as they identify genes outside of the PWS region on Chromosome 15 that might also contribute to the PWS phenotype. Understanding the role of these genes in the development of PWS may offer new targets for development of PWS therapies.  In addition, the researchers also found a potential cellular mechanism for why those with PWS by UPD have a higher risk of also having autism, through dysfunction of the mitochondria. This opens up a new line of study in which it will be important to test whether enhancing the number of mitochondria and improving their function may reduce the risk of developing autism in PWS.  The DPSC cell system should provide an excellent cell system in which to test this hypothesis and evaluate different potential drugs for this purpose.