New research on facial and voice processing in PWS could help improve social interactions for people with PWS and their social group. 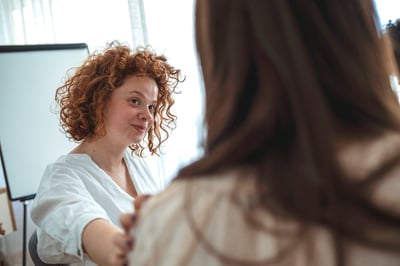 Children and adults with PWS frequently show impairments in their social interactions. New research on how people with PWS process visual and auditory cues could lead to social interventions that help.

Impairments in social interactions can make it difficult for people with PWS to make and keep friends and can make every day social situations stressful and challenging. In order to help individuals with PWS improve their social skills, it’s important to first understand why they may have challenges in social interaction compared to their typical peers. Two new papers shed light on this question, and explain why people with PWS may be at a disadvantage compared to their typical peers in staying attuned to social cues.

Drs. Pascal Barone and Maithe Tauber and their teams at the University of Toulouse in France are interested in understanding social development and social impairment in PWS, and have received funding from FPWR for their work. They have been studying how individuals with PWS process visual cues (facial features) and auditory cues (voices) needed to have successful social interactions. Specifically, they’re interested in whether those with PWS have difficulty in recognizing emotions and intent.

Two recent papers published by their group begin to tease apart the underlying basis of why individuals with PWS may have a hard time socially. It’s important to note that all genetic subtypes of PWS (deletion, uniparental disomy [UPD], imprinting defect [ID]) show communication/social cognition challenges, but individuals with the UPD or ID tend to have a harder time processing social communication and are more likely to be diagnosed with autism spectrum disorder (ASD).

The first paper, Face Processing and Exploration of Social Signals In Prader-Willi Syndrome: A Genetic Signature, examined face processing and emotional recognition in PWS. The researchers found that all individuals with PWS (n=39 adults) took longer than typical individuals to process facial cues and decide what emotions were expressed. Further, they were less accurate than controls in accurately identifying emotions. Using eye tracking to see where an individual’s gaze was looking, the research team also found that individuals with PWS by UPD in particular had a different pattern of face exploration compared to typical individuals, with less time spent looking at the eyes and more time spent looking at nose/mouth region.

The results indicate that overall, people with PWS did not perform as well as the control group in identifying voices. With respect to genetic subtype, the researchers found that those with UPD subtype had greater deficits in perceiving and identifying voices that those with the deletion subtype. Individuals with PWS also did worse than the controls at identifying non-voice sounds. Again, individuals with the UPD subtype had a harder time compared to those with deletion on average, but there was considerable individual variability and overlap between the groups. Interestingly, both subtypes of PWS were better at identifying voices compared to nonvoice sounds.

The researchers also looked at reaction times and decision-making. The mean response times for PWS individuals in recognizing both non-voice and voice stimuli were significantly longer than the controls’ response times, indicating that processing times were slower. The researchers used modeling to conclude that individuals with PWS need to accumulate more information in order to make a decision with respect to voice and non-voice processing.

Altogether, deficits in voice and non-voice recognition, difficulty distinguishing voices from environmental sounds, slower processing times and poor emotional recognition means that individuals with PWS may be at a disadvantage compared to their typical peers in staying attuned to social cues, which are rapidly changing in most social settings. All individuals with PWS are impacted, but those with PWS by UPD are more likely to have a harder time. The development of tailored PWS interventions, based on an understanding of the specific weaknesses exhibited by those with PWS, may lead to more fulfilling social interactions for individuals with PWS and their social group.