Hip Dysplasia in Babies with PWS May Not Need Aggressive Treatment

A study looking at the long-term consequences of hip dysplasia in babies with PWS provides guidance and suggestions for physicians and parents. 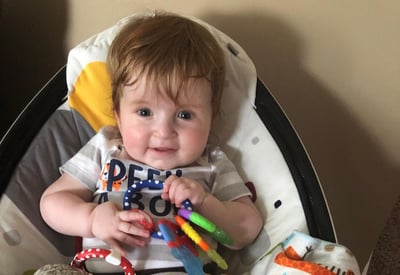 Orthopedic Concerns and Treatment in PWS

There are many orthopedic concerns associated with Prader-Willi syndrome (PWS). These include decreased bone mineral density (weak bones), scoliosis, and hip dysplasia, a condition where the socket of the hip is too shallow to fix the ball of the hip. Hip dysplasia has been reported in 8% - 30% of infants with PWS, but that prevalence could be higher, as hip dysplasia is sometimes not evaluated and properly diagnosed. This prevalence is much higher than that in the general population, where hip dysplasia occurs in about 1% of typical babies.

If hip dysplasia is detected in a baby with PWS, the best course of action isn’t yet clear. Hip dysplasia can be treated, usually by bracing or a casting, such as a with Pavlik Harness, but these approaches restrict movement and may do more harm than good for general motor development. In the case of PWS, continued growth, activity and development may allow the issue to ‘fix itself’ without intervention. However, the concern about not treating hip dysplasia is that it may led to pain and arthritis later in life, and, at its worst, lead to the person needing total hip replacement (also known as total hip arthroplasty, or THA).

It is against this backdrop that Jessica Cox, a PWS mom, had a conversation with Dr. Harold van Bosse, an orthopedic surgeon who sees many children with PWS, about how one might begin to understand the long-term consequences of early hip dysplasia in PWS. Jessica recruited another PWS mom / research statistician, Marie Gantz, and a biomedical engineer (Kevin Ong) to work with her and Dr. van Bosse to examine hospital records and see if the incidence of THA in the PWS adult population was higher than the typical population. The group hypothesized that if the hip dysplasia that was common in infants with PWS leads to serious joint degeneration later in life, they would likely see a higher rate of THA in those with PWS compared to the general population. The researchers also wanted to look at total knee arthroplasties (TKA) to determine if people with PWS are more likely to develop degenerative changes in weightbearing joints in general.

To research this, with funding from FPWR, the research team used data from 2004-2014 from the National Inpatient Sample of the Healthcare Cost and Utilization Project, the largest all-payer inpatient care database. The database has data from 7 million hospitalizations, but the data can be weighted to estimate more than 35 million hospitalizations. In the 11 years of data analysis, 1,957,144 hip or knee arthroplasties were identified in the database, for an an estimated 9.4 million patients nationwide with a hip (3.1 million) or knee (6.3 million) replacement during that time frame. Of these 9.4 million patients receiving the hip or knee replacements, an estimated 65 people were diagnosed with PWS (estimated 39 with THA and estimated 26 with TKA). This means that 7 patients with PWS per million had either a THA or TKA. Thus, overall the relative rate of hip replacement in people with PWS is between 1/3 to 1/8 of typical adults, and the relative rate of knee replacement for people with PWS is also much lower than that in the general population.

For those with PWS who did have hip or knee replacement, they had the surgery at a younger age (68% of people with PWS were younger than 50 years old, while only 7% of people without PWS were younger than 50 at the time of the joint replacement). People with PWS were also more likely to be transferred to another facility after surgery (for example, a long-term hospital, a skilled nursing facility, or intermediate care) compared to those without PWS (77% versus 36%).

Overall, this analysis shows that people with PWS have a low prevalence of hip and knee problems that lead to surgery. The researchers postulate that there may be several factors contributing to this, including a low activity level of adults with PWS, high pain tolerance, or a shortened life expectancy. Nonetheless, the finding that hip dysplasia is more common in babies but hip/knee replacement is less common in adults with PWS is not supportive of an aggressive approach to treating hip dysplasia in babies with PWS. To this end, the paper also provides some guidance and suggestions for physicians who are evaluating babies with PWS, including when to do x-ray imaging of the hips, as well a strategy of ‘active observation’ only for stable or improving hips. The authors believe this relatively conservative approach will prevent overtreatment of hip dysplasia in PWS.