Insights Into the Sleep, Seizures, and Psychiatric Behaviors in PWS

A study examines sleep disorders, seizures, and psychiatric behaviors to understand how often and at what age PWS caregivers can expect these symptoms.

A newly published paper examines sleep disorders, seizures, and psychiatric concerns in PWS. Thanks to almost 900 PWS families who completed multiple surveys in the Global PWS Registry, the study provides a great deal of valuable data and new insights into the relationship between these important aspects of PWS.

The study, Neuropsychiatric Features of Prader-Willi Syndrome was led by Dr. Jessica Duis of Children’s Colorado, joined by Marie Gantz, who is a senior statistician with RTI International and a PWS mom, Dr. Ann Scheimann, and members of the PWS research team.

The goal of the study was to better understand how often and at what age these symptoms occur, to identify potential factors (for example, genetic subtype) that increase or decrease the likelihood of experiencing these symptoms, and to look for associations between these features of PWS. Thanks to almost 900 PWS families who completed multiple surveys in the Global PWS Registry, this paper is packed with data, and these researchers were able to gain some new insights into the relationship between these important aspects of PWS. 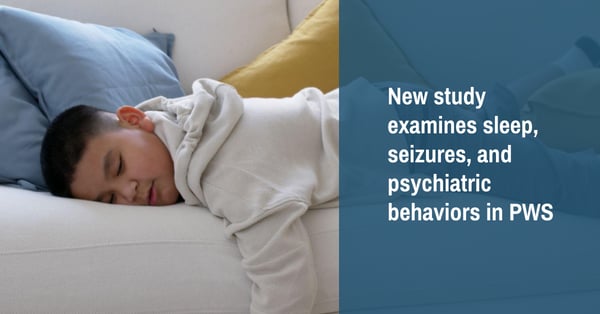 Among the findings, a total of 16% of participants had experienced at least one seizure. As has been reported in previous, smaller studies, seizures occurred more often in individuals who had PWS due to deletion (18%), compared to those with PWS by uniparental disomy (UPD) (10%). Some of these were febrile seizures (seizure associated with an illness where there is a fever) and tended to be in very young children (0-3 years old), while others were classified as epilepsy (repeated seizures) and those tended to have a later onset (5 years). Reassuringly, most families reported improvements in the frequency of seizures over time, suggesting that febrile seizures are rare as the person with PWS gets older, and commonly prescribed medications for epilepsy are often effective in those with PWS.

The study also looked what age sleep disorders and other behaviors appeared. With respect to behaviors, obsessive compulsive behaviors and anxiety were very common and appeared earliest, most often at age 5 and 8, respectively (although there was a wide range of age at onset). Depression was reported less often (18% of respondents) and occurred later (most often ~14 years old), while more serious mental health concerns, such as psychosis, occurred most often in late teens, but were less common (7.5% of all respondents). An association was found, wherein individuals who experienced anxiety were also more likely to have additional behavioral and psychiatric findings such as obsessive-compulsive behaviors, depression and psychosis.

Excessive daytime sleepiness (EDS) was common (reported in 55% of individuals) and was sometimes associated with cataplexy and/or narcolepsy (diagnosed in 9% and 6%, respectively). Interestingly, individuals with EDS had a significantly higher frequency of co-occurring psychiatric concerns, including anxiety, depression and psychosis, than those who did not experience EDS. It's not clear why this is the case, but this is an area that warrants further study. An additional association was found between narcolepsy and epilepsy in those with PWS by deletion.

Most behavioral concerns occurred at a similar rate regardless of PWS genetic subtype, except for skin picking, which was slightly higher in deletion subtype. With respect to psychiatric problems, psychosis was reported more often in those with PWS due to UPD, aligning with previous reports. In all, 13% of participants had been hospitalized at some point due to psychiatric concerns.

This study had some potential limitations, including a population in the Global PWS Registry that may not fully represent the entire PWS population as well as the lack of medical confirmation of some of the diagnoses, since the symptoms are reported by the caregiver. However, the large number of participants allowed robust analysis of features such as age at onset of behaviors, and also allowed the researchers to find associations that had not been identified in prior work, and which will be of interest for future studies.