Sleep Apnea in People with PWS

Many children with PWS suffer from sleep apnea, which impedes blood flow to the brain, but a promising new treatment is on the horizon. 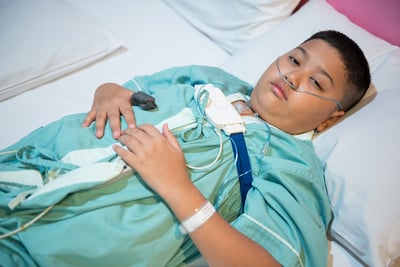 Is your loved one getting a good night’s sleep?

Sleep apnea is a major concern for people with Prader-Willi syndrome, affecting as many as 70% of all participants in the Global PWS Registry.

This condition makes it difficult for people to sleep through the night because their breathing is disrupted. It is also connected with other serious health problems such as memory issues, high blood pressure, stroke, heart failure, and diabetes.

How does sleep apnea affect people with PWS? And what can we do about it?

What Is Sleep Apnea?

Sleep disordered breathing (SDB) is a large category of conditions that includes hypoventilation (breathing that is too shallow or slow to be effective) and sleep apnea. Sleep apnea occurs when breathing repeatedly stops and starts during sleep, leading to low blood oxygen levels.

There are two types of sleep apnea, obstructive and central.

1. Obstructive sleep apnea (OSA) is when tissue physically blocks airflow. This is often caused by soft tissue collapsing around the airway. Obesity and/or large adenoids or tonsils contribute to obstructive apnea, and snoring is a common indicator.

2. Central sleep apnea (CSA) is when the brain doesn’t send the correct signals to trigger breathing during sleep. There are long pauses in which someone basically “skips” breaths.

People can have one type of sleep apnea, or in some cases, both at the same time.

These conditions are serious, especially for infants and children with PWS.

How Does Sleep Apnea Affect People with PWS?

How Common Is Sleep Apnea?

Sleep apnea is a huge problem for many families. Obstructive sleep apnea affects an estimated 18 million adults in the United States alone.

Among participants in the Global PWS Registry, 70% who have had a sleep study have been diagnosed with some form of sleep apnea. Central sleep apnea appears to be common in infants with PWS, occurs with less frequency in older children with PWS, and can be improved with supplemental oxygen during sleep.

What Are We Learning About Sleep Apnea in PWS?

One study collected data from 44 patients (0-18 years; approximately half infants [under age 2] and half age 2-15) at the Hospital for Sick Children in Toronto. It found that

1. Approximately 57% of PWS patients had some form of sleep disordered breathing before starting growth hormone therapy.

2. Central sleep apnea is found more often in infants (43% of the infants), whereas older children (>2 years) are more likely to suffer from obstructive sleep apnea.

The current standard therapy for obstructive sleep apnea is continuous positive airway pressure (CPAP). However, many patients don't respond to CPAP, and others don't use it as prescribed because of discomfort.

The Global PWS Registry shows that 50% of those prescribed CPAP use it less than prescribed, or not at all.

However, recent work out of the University of Pennsylvania is exploring a new therapy for the treatment of obstructive sleep apnea. In a clinical trial with 20 patients, researchers tested a device that stimulates the nerve that controls tongue movement when there is a pause in breathing. The device is implanted in the chest and can be turned on and off by the patient when going to sleep and waking up. The results show an 84% reduction in breathing pauses and an 11% increase in blood oxygen levels, suggesting that hypoglossal nerve stimulation (HGNS) may be an alternative for those who can't tolerate CPAP.

What Can Parents Do?

Because sleep apnea and other sleep disorders are so common among children with PWS, it is strongly recommended that parents of all infants with PWS enroll them in a sleep study. Sleep studies yield important data that can help improve the health of children with PWS. Without sleep studies we wouldn’t have the baselines for comparison of new treatments.

More information about individuals with PWS yields valuable data for improving the lives of everyone in the PWS community.

It’s also important to add your experience with PWS to the Global PWS Registry. It’s a safe way to contribute valuable information to the growing body of knowledge about PWS.