A family supports Paul Golub's cross-country bicycling adventure in honor of his nephew, to help advance PWS research and treatments.

Paul Golub’s 30th anniversary working for Walmart in Athens, GA, was just around the corner, when his upper management approached him and asked what he would like to do to celebrate the occasion. After spending some time thinking about it, he remembered something that his brother Larry had suggested about 5 years back — that they should ride their bikes coast to coast someday.

“Sometimes when you take out 'impossible', you can do things that you thought weren’t possible," said Paul.

Paul’s nephew and Larry’s son, Maxx, has been living with Prader-Willi syndrome (PWS) for 13 years. When Paul approached his family and his management team at Walmart about his idea to ride coast-to-coast to raise awareness and fundraise for Prader-Willi syndrome research in honor of Maxx, he found support for his 5-week adventure — and things moved pretty quickly from there.

“I have a real passion for riding a bicycle," said Paul. "But actually, I had never ridden more than a couple hundred miles in two days, before I did this!"

On Wednesday, April 24th, 2019, Paul started his ride and continued the 2,272 miles across the U.S. with the help of his family. Along the way he handed out informational cards about PWS and how people could donate to support PWS research. He met friendly faces all across the U.S. who supported him. His sister-in-law Gretchen Golub helped manage his Team FPWR fundraising website and update on social media, while Maxx’s Uncle Bob also fundraised for the cause and rode a portion of the trip.

“It was mentally hard. The long stretches by yourself – but I always had somebody up ahead of me to look forward to seeing," said Paul.

Larry, Bob, Bill and Judy (Paul and Maxx’s relatives), helped fulfill the roll as SAG driver during portions of his adventure, and sometimes riding alongside him on their own bikes. 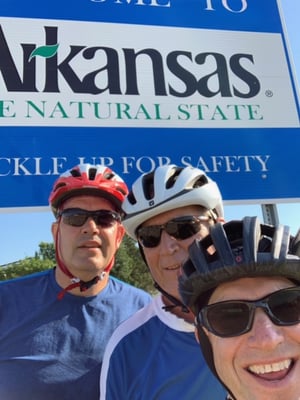 Support from a Family of Adventurers

The whole family seems to have a sense of adventure – “thrill seekers," Paul says. Paul’s brother Larry (Maxx’s dad) has run marathons and triathlons and has influenced Maxx and his love for thrill and adventure. “Maxx lives for adventure,” said Paul. “He’s an adrenaline junkie; he loves to go zip-lining and doesn’t shy away from challenges.”

When Paul arrived at the end of his trip at Tybee Island on the Atlantic Coast, he was greeted and surprised by his family, including his mother, Mary Ann; his brother, Larry, and sister-in-law, Gretchen; their son, Maxx; and his cousin Judy and brother Bill. They finished their celebration by throwing Paul’s bike into the ocean (fishing it back out later) and having dinner together.

"Maxx was very excited. He celebrated me like I had just won the World Series!"

We at FPWR thank Paul for showing us that the impossible is possible, and for honoring Maxx and supporting the Foundation for Prader-Willi Research on this big adventure!

To turn your own adventure into a fundraiser for PWS research, reach out to Sarah Peden or visit the FPWR Take Action page to get started! 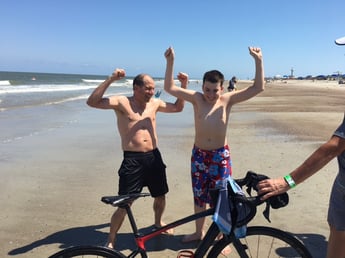 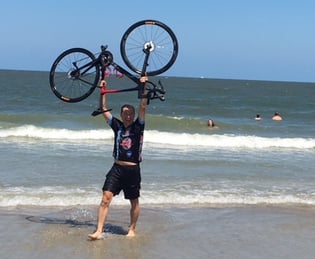 Sarah is FPWR's One Small Step coordinator. She became involved with FPWR shortly after the diagnosis of her daughter, Lily in late 2009. She first began fundraising through her “Running for Lillian” event where she and her friends raised funds for PWS research through peer-to-peer fundraising. Sarah joined the One SMALL Step team in 2012 holding her first of many walks in Bloomington, Indiana. Sarah has held multiple volunteer roles with our organization prior to joining our staff and was the chair of our Community Leadership committee from 2014-2015. She has more than 11 years of event planning experience with for-profit and non-profit organizations and hold a Bachelor of Science in Recreation with an emphasis in tourism, hospitality and event management from Indiana University.