The first-ever study on part one of the MAGEL2 protein revealed the form of this protein, how it's different in SYS and PWS, and how treatments could help.

Dr. Rachel Wevrick and her team have just published a new paper looking at the function of the protein encoded by the MAGEL2 gene, one of the genes in the PWS region of chromosome 15. This is the first-ever study to look at the first part of MAGEL2. The paper reveals new information about the form and function of the protein encoded by this gene and points to potential genetic therapy approaches for both PWS and SYS.

The paper, The N-terminal Domain of the Schaaf-Yang Syndrome Protein MAGEL2 Likely Has a Role In RNA Metabolism, was published in the Journal of Biological Chemistry. 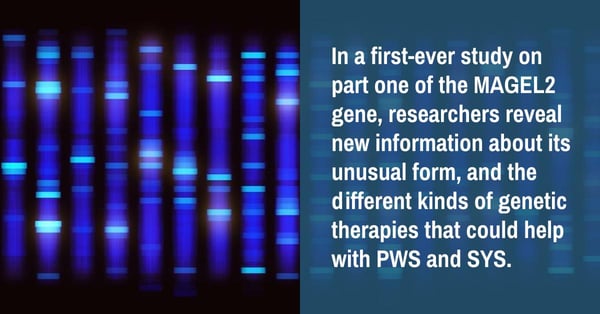 Role of MAGEL2 in PWS, and SYS

MAGEL2 is one of the genes that is missing or inactivated in the PWS region of chromosome 15. Mutations of the MAGEL2 gene alone results in Schaaf-Yang syndrome. Therefore, PWS research that leads to an understanding the MAGEL2 protein and how it functions normally, as well as in PWS and in SYS, is critical to devising effective therapies. MAGEL2 studies suggest that MAGEL2 normally has a role in mRNA metabolism and that certain mutations cause the protein to actively interfere with these normal processes. With a deeper understanding of the role MAGEL2 plays in mRNA metabolism comes the possibility for a therapeutic intervention to minimize or eliminate the protein interference.

The MAGEL2 gene is one of several protein-coding genes that are inactivated or absent in people with PWS. Mutations in the MAGEL2 gene alone can cause Schaaf-Yang syndrome (SYS). Many of the symptoms of PWS are also present in people with SYS, although SYS often presents with more severe neurological, developmental and physical disabilities. Actually, two MAGE proteins, MAGEL2 and its neighbor necdin, are inactivated in people with PWS. MAGEL2 was originally thought to be a medium size protein that is similar to other proteins in the “MAGE” family. We now know that MAGEL2 is actually a larger two-part protein.

Findings: First Part of MAGEL2 Can Lack 'Spaghetti' and/or 'Box'

Wevrick and her team found that the first part of MAGEL2 has an unusual form, consisting of repeated sections that line up with each other, like dry spaghetti in a box. In PWS, the spaghetti and the box are gone. In the most common mutation in SYS, the second part (the box) is gone, while the the first part (the spaghetti) is still made. Without the box, the researchers predict that the spaghetti can become wet and tangled, and then interfere with other proteins that it gets close to.

Many of the proteins that are close to the first part of MAGEL2 are involved in processes that regulate mRNA (messenger RNA). mRNA takes the instructions encoded in DNA and acts as a template for the production of proteins. Changes in the way mRNAs are processed are the cause of other neurodevelopmental disorders, because they can cause differences in how much of many different proteins are made.

The findings of this study suggest that strategies that target the misfolded partial MAGEL2 protein may be useful in SYS. Other therapies that replace the function of MAGEL2 may compensate for the loss of MAGEL2 function in people with PWS.