The brain balances energy stores with energy expenditure with little conscious effort. The hypothalamus is a part of the brain that senses levels of a hormone called leptin, which is produced by fat. Excess leptin normally causes a decrease in appetite and increase in activity. This balance is disrupted in obese children who carry mutations in genes in the leptin response pathway. We now have convincing evidence that one of the genes inactivated in children with PWS, namely MAGEL2, is essential for leptin signaling in the hypothalamus. Mice missing Magel2 are obese and underactive. We found that some of the hypothalamus cells that sense leptin do not properly function in mice missing Magel2. These neurons normally act on other neurons through the release of a factor called alpha-MSH. We believe this defect causes the mice to fail to properly balance their food intake and activity levels, leading to obesity. We propose that loss of human MAGEL2 causes the fat accumulation, reduced resting energy expenditure, and contributes to hyperphagia in children with PWS. Thus, the underlying cause of obesity in PWS may have considerable overlap with other genetic disorders that cause severe childhood obesity. In this study, we will examine whether mice lacking Magel2 are unresponsive to leptin from birth, or whether insensitivity happens gradually. We will test whether giving the Magel2 mutant mice a drug that is similar to the missing alpha-MSH causes them to eat less and lose weight. We will also test whether daily administration of this drug prevents the Magel2 mice from becoming obese. In summary, these experiments will determine the best time for interventions that improve sensing of leptin in neonatal and juvenile mice, and test a potential treatment for leptin insensitivity, using an obese mouse model of PWS.

MAGEL2 is the gene responsible for PWS-like syndrome (PWLS) and is one of the genes deficient in typical PWS. In mice, MAGEL2 function is required in adult hypothalamic neurons that sense leptin, which is the major hormone that regulates appetite. Adults and older children with PWS have hyperphagia, suggesting that their hypothalamic neurons may be unable to sense leptin. Unlike other genetic obesity disorders where overeating starts before age 2, in PWS infants and young children have normal appetite, with increased interest in food starting around age 5. We believe that neurons that control appetite may function normally in early childhood, but gradually degenerate because they lack the MAGEL2 protein. We tested hypothalamic neurons in neonatal to adult mice lacking MAGEL2. We found normal leptin sensing in mice up to 4 weeks old (equivalent to 14 mo in human) but partial loss of function by 6 weeks (~12 yo) and complete loss by 10 weeks (~late teens). This suggests that although the MAGEL2 gene is missing from the time of conception, these critical hypothalamic neurons are still functional in young children. Their gradual loss of function may cause the transition from normal to excessive appetite in children with PWS. Our future goal is to find a way to retain the function of these appetite-regulating neurons, and postpone or eliminate the transition to hyperphagia that occurs in PWS. 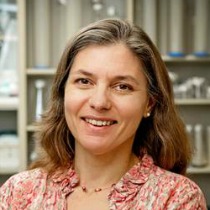